Hey, guys! As you know, I am currently traveling through Spain to take summer classes at the University of Seville and improve my Spanish (only a year’s worth of tuition!). Over the past week, I’ve seen a lot of amazing sights in Madrid, Cordoba, and Seville. So instead of writing a super detailed account of everything, I’m going to write a short paragraph about each area I’ve visited–I would normally include pictures, as well, but my travel computer is not a very high-quality one! Instead, I’ve included a small tag line beneath each section to serve as minor entertainment.

Then, I’m going to ask you guys to please comment on which areas you would like to hear more about form me—I’ll post a more detailed account WITH pictures of whichever area you guys choose! I’ll also post a separate blog entry to talk about my Spanish progress (you guys need to hold me accountable!).

As you’ll read, it was a bit of a rocky start due to fatigue and the inconveniences of travel. But I’m currently having a blast!

There’s no wifi to contact people with and the security guards are mean. Great start.

Madrid. Come for the culture, stay because you can’t afford a ticket out.

Madrid has gorgeous architecture and lots of historical and cultural sites to see, but not much plant life. Very touristy and crowded in most places, but it was also a lot safer and easy to navigate than we were told to expect.

Fun Fact: the yew tree is so poisonous that its tea used to be used for committing suicide.

This place was HUGE. We had a tour guide who was very educational; she was discussing college-level biology, and I bet the kids receiving that tour wil have a bright future in the sciences! I will say that the tour was long, and there were few places with shade or places to sit. I found the experience to be worth it, but not all students on the tour did.

4. The Prado Art Museum (collection of art up until Pablo Picasso’s birthday)

Because nothing says Spanish culture like a quiet, air-conditioned stroll through a museum.

The tour was very long, especially after the botanical garden. Some was cool, but I was mostly too triggered from English class about symbolism (another reason to reform our English classes). My favorite painting was one that used two vanishing points. Paintings with two vanishing points tend to “follow you around the room,” so the angle of the painting seem to change as we walked across the hall.

5. Lessons Learned from Meals in Spain

They charge for water unless you explicitly ask for free water. They almost never let you split the bill, which causes plenty of inconvenience. Some places do charge for silverware use, and the task isn’t included in the meal price (whereas in shops it’s included). However, tipping your waiter is optional (and often not merited).

While in Spain, I’m no longer a pescatarian (like vegetarian but with fish), which has had mixed results.

Migas is normally some mix of sausage soaking over bread (in Spain) or eggs (in Latin America). My taste for sausage is apparently still gone, but the bread is good.

Sangria is the local variety of wine, and tastes like sour cranberry juice.

These are lightly-fried balls of meat and cheese. I could eat these all day, but I wouldn’t call them addictive.

English translation: Iberian Ham. You would think it’s just ham made from Iberian pigs, but I swsear they put something in this that makes it taste heavenly. It made me thankful to give up pescatarianism for these five weeks.

If you get ice cream here, it doesn’t need to be gelato, because the regular ice cream is already awesome.

The dish I had in Cordoba was pretty good, but I’ve been told that I have much to look forward to when I try “real” paella. 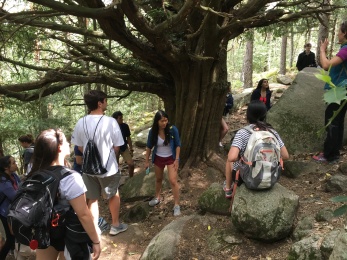 Around the yew tree

Stroll through the woods

Selfie at the cliff

Stroll through the woods

Around the yew tree

Selfie at the cliff

“The pioneers used to ride these babies for miles” – My roommate quoting SpongeBob.

SO PRETTY. My favorite thing to do in the outdoors is scamper up rocks and boulders.

The Royal Palace, because I wasn’t insecure enough about my social class.

A large (bigger than Versailles), pretty building. But once you get over the concept that people actually lived in such luxury, it’s nothing especially interesting. My sore feet were also quite a bit of a distraction.

The most interesting collection of things that no longer exist!

This museum has awesome content! I’d say much better than the Natural History Museum in New York, and on par with the one back home. I loved the focus on Iberian natural history because it was very different from other natural history exhibits I’ve seen, but unfortunately our tour guide was limited in his English, so some of the content was lost.

“Hotter than the sun in the south of Spain” – Sean Kingston

The south of Spain is indeed quite hot. It’s about as hot as back home in Texas, only here typical homes don’t use air-conditioning. Instead, Sevillians use abanicos (small, colorful fans) to cool themselves, and keep their windows open at night to let cool air in (they keep the blinds closed to keep out animals and bugs).

As usual, the amenities here are somewhat different than in the US. Like in Ecuador, many toilets here apparently cannot handle toilet paper, which is instead thrown into a waste bin nearby. Bathrooms include bidets, and the shower may or may not spill its own water out all over the floor. Our hotel saved electricity by having it only function when keycards (and therefore we) were in the room. However, that also meant that the refrigerator only worked when we were in the room, which seems somewhat counterintuitive.

The outside world is also quite different. Many of the dogs on the streets are greyhounds or greyhound mixes, streets are narrow and walls are high in order to maximize shade, and the streets are lined with sweet-smelling orange trees. I at first wondered why no one was eating all the delicious, free citrus dropping to the ground, until I tried one. It turns out that there are many varieties of oranges. Some taste like oranges. Others taste like stomach acid.

Very impressive overall. It’s really interesting to hear the logistics of the architecture (mosques have an open design with nothing but pillars so everyone can hear the preacher, many of the columns were appropriated from other monuments to speed u construction, etc.). Perhaps my favorite part was the fact that the Christians left much of the mosque in place in order to accommodate the large Muslim population living in the city after the Reconquista.

I’m mostly just wondering how they got those statues up there. Also, good for them for not allowing people in on mass without proper dress. The boy with shorts in our group didn’t appreciate it, but it’s nice to limit tourism a bit. We actually got lost inside after our tour guide left us. My favorite part has to be the design of the statues holding up Christopher Columbus’ tomb.

If your feet are too sore to walk on, take a break and make your butt too sore to sit on.

Ok, this was so awesome that I just have to give it more than one paragraph. We biked all over the west part of the city, along the not-real river Guadalquivir and around various parks and plazas on either side. You can rent a bike for 10 euros a day, so all 28 of us mounted our rental bikes and followed our program director across Seville. It was difficult to ride as one long line along the bike paths (since crosswalks are only green for so long, and our line kept breaking), but it was great when we reached the riverside and plazas and could ride side by side as a pack.

I’d forgotten to put on sunscreen, so when we stopped at the Plaza de España (where they filmed Naboo in the Star Wars prequels), I rubbed some cool water from the fountain on my arms and face. We were off riding again a moment later, breathing in the scent of countless oranges sprawled across the walkways, speeding beneath canopies of blue jacarandas trees, the water on my arms feeling fantastic in the wind. Some doves took off as we rode by, keeping pace with the bikes so they seemed to be standing still in the air.

The ride along the river was less romantic, but still my favorite part. We had a wide berth to ride there, and we could watch people jogging, rowing, fishing with enormous poles, and screaming on the rollercoasters on the other side of the water. Unfortunately, as mentioned above, many dogs are not on leashes, and dogs do not follow bike paths. I don’t think I’ll ever feel as guilty as I did bumping (as I was trying to slow down and turn) into a small dog. Poor thing. I just stood there looking dumbly at the owner clutching her pupper before I decided to take off and not get left behind by the program director. There were several accidents with the bikes, not the least of which were one girl face-planting into the ground, and another boy running straight into the railing along a bridge (thank god there was railing, or else we would have had a chico mojado). We stopped in a park where children were playing. One boy greeted us with an English “Hello,” and he was quite confounded when I responded with a Texan “Howdy.” I was equally as surprised when we approached the Puente de Alamillo (the big white bridge that looks like an accordion). Since there were no bike paths, I was expecting us to stop, but the next thing I knew, we were riding across a smaller bridge above the main automobile bridge. We were single-file on bikes, riding above traffic, above the biggest river in Spain.

In short, it was awesome.

I think I’ll end it there, on a high note. I’ll be posting another blog detailing my progress with Spanish soon. Don’t forgot to comment on a section you’d like to see pictures of and hear about in more detail!